The Christmas season is always brighter when we find something bigger than ourselves. Three members of the Taylorville High School Band found just such a thing on Saturday, December 17. Carson Hefner, Lucas Carnahan and Sophia Thomas answered the call in sub-freezing temperatures to help fulfill the wish of three year old June Peden-Stade, who suffers from stage 4 neuroblastoma. These three THS Band members joined band students from Auburn, Glenwood and New Berlin high schools to perform in the Make-A-Wish sponsored parade in Auburn. The mass band performed June’s favorite song, Let It Go from the movie Frozen. THS Band senior Carson Hefner stated, “Even though the weather was cold and the was put together on short notice, there was a large crowd present to show support for June and all the area band members were happy to do it for June.”
THS Band members who performed in the Make-A-Wish Parade are from left to right: Carson Hefner, Sophia Thomas and Lucas Carnahan.
Pictured are all of the band members from Taylorville, Auburn, Glenwood and New Berlin high school bands who performed Saturday in the parade for three year old June Peden-Stade. 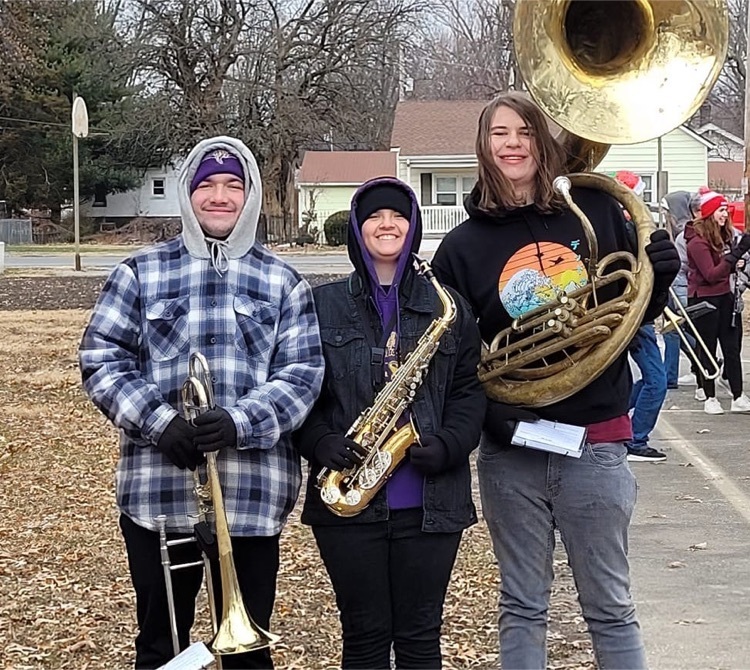